An interview with The Neon Judgement

Thanks to Dirk Da Davo for answering my questions before The Neon Judgement leave for tour, if you live in Europe please make your way to one of their summer concerts, where they will be playing songs from Early Tapes! The band will have the LP for sale at the merch table too! The full schedule is HERE

1. You hail from the small town of Leuven, Belgium. What was it like growing up there and what music inspired your teenage years?
Leuven is a university town with a lot of young people around. A few nice bars, one amongst them was named ‘Arnoz’, a punk bar where we spent a lot of hours There also was a club named ‘Atelier’ that played real avant garde music for that time. People came from far to visit this club because the DJ played music that was never heard before!  At the time TB Frank and I were often listening to The Velvet Underground and early Pink Floyd (Syd Barrett) albums. 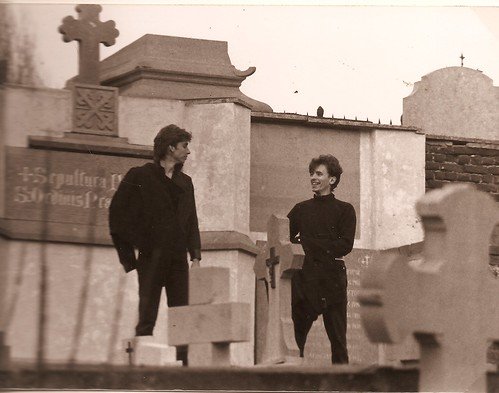 2. How did you form the band and choose the name, The Neon Judgement?

TB Frank and I were neighbours at the time. We both had no brothers or sisters, so we spent
a lot of time together at Frank’s place. At that time we had a melodica, an acoustic guitar and a ghettoblaster. We just started for the fun, recording experiments with those instruments. The table was used as a drum! After some evolution in this set up, we had to come up with a band name. First it was ‘Agnosis’, but that name didn’t last very long. But to get to TNJ : The idea was that the NEON light, that all government buildings are lit with and where all BIG political decisions are made, made a judgement over the people. First we thought about naming our band ‘Judgement of Paris’ mostly because we liked the word ‘Judgement’. After using our imagination, we came up with the philosophy of the NEON light judging society.

3. Where did you come up with the nicknames TB Frank and Dirk Da Davo?

I guess we were born with a rich imagination. No, seriously TB is inspired by Frank’s coughing (TBC, hence the link) and Da Davo finds its inspiration from the days we were recording our first musical efforts with a ghettoblaster. There used to be a song I called “It’s Da Devo” and from that title I simply changed it to “Da Davo.” It sounds quite Spanish which was perfect as people often thought I had Spanish origins because of my look. Apart from that it’s also a sort of wordplay from “The Devil.” 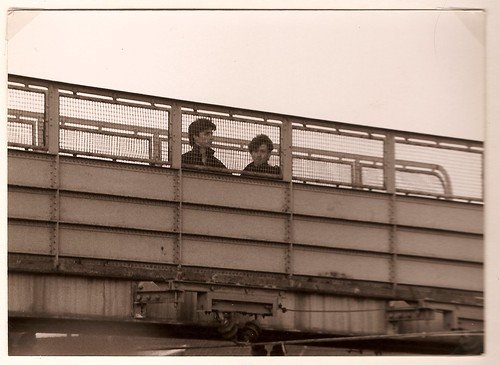 4. Do you remember the set up and equipment for recording your earliest songs?

Well, we had the set up with the melodica and the acoustic guitar. After that Frank bought an electric guitar and I bought the Yamaha CS 10 as our first synthesizer. With this synth it was easier because I didn’t have to blow anymore. But the first official recordings were made with this equipment (Suffering tape). We also bought a little drum composer BOSS DR-55 Dr.Rhythm. It also made it easier because we didn’t have to knock on the table anymore to make some kind of a drum sound.

5. How did the evolution of the synthesizer in the early 1980s have an effect on your sound?

The music became noisier, but we didn’t care too much about new instruments. We just had the line up with a Korg Mono Poly, Yamaha CS 10 and later on the TR808 drum machine and guitar. That was enough for us. I chose the keyboards very carefully at the time. And it might be unbelievable but they do still stand! I bought a Roland SH201 keyboard some time ago. I started to work with this machine and it was amazing how the sound of this new synthesizer is so close to the keyboards I’ve been using all my life! I felt a bit like the James Brown drummer discovering this.

6. What were the inspirations for your lyrics on the first two tapes?

Daily life I guess. We were very angry and a bit paranoid as far as the society ‘system’ is concerned. George Orwell’s book 1984 was an inspiration for us lyric wise. 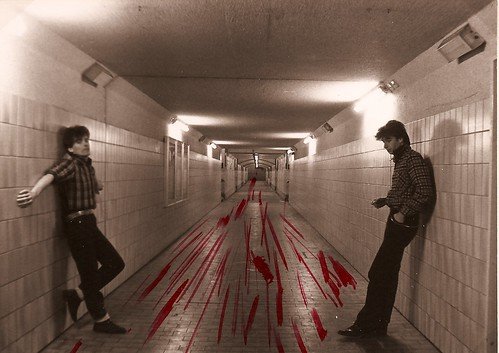 7. Were you aware of your contemporaries in Belgium at the time, like Polyphonic Size, Snowy Red, and Absolute Body Control?

Not really. We all were living and working each on our own island. It was also the time of  ‘cold wave’. It was uncool to be very social!

8. So much creative and diverse music came out of Belgium in the 1980s, what do you think caused this rich and talented culture?

Belgium is a real melting pot of different cultures. We are in the centre of Europe and it always has been a kind of chaotic and confusing country in many ways. This is a perfect circumstance for art. When we were touring outside our country, we often were asked the question: What is it about Belgium? People were curious about a country where they produced such weird music. Like the famous Confucius once said: If you want to know if people get ruled well or have good or bad laws, you should investigate/listen to the music they make. Something to think about, right?

9. I first heard your song “TV Treated” on a compilation called New Wave Class-X when I was a teenager and I was immediately hooked to the synth stabs and hypnotic lyrics. How did you create your unique sound?

Using our imagination. We did a lot of jam sessions together and so the sound grew out of those jam sessions. 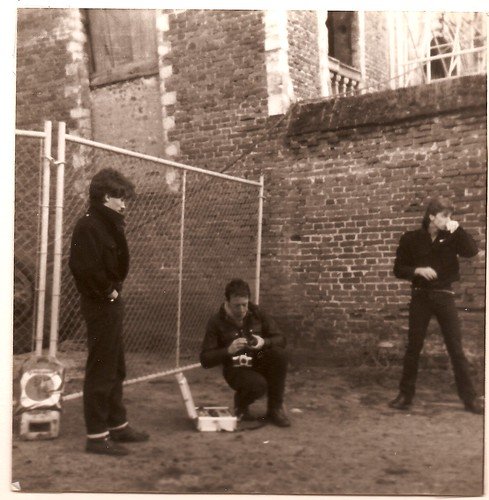 10. Many of the songs on “Early Tapes” have been played in dance clubs around the world. Did you write music to make people dance?

Yes we did. We had the idea of making dance music. At the end of the 70s, we had the disco from Blondie, we listened to George Clinton ‘funk’ and even to Earth Wind & Fire! Funky danceable disco like stuff. Basically, disco inspired us to make the beats as how they are there now!

11. Can you describe your most memorable/favorite live gig from the earlier years?

Haha. The first gigs we ever did, the pauses in between the songs that we played were longer than the songs themselves. We had a large table in front of us again, and we used a lot of effects pedals. Every song we had to change the pedals in between the equipment that we used, it was funny. The picture under the plastic thing that was used on the insert for Early Tapes was from the first TNJ concert ever at ‘Arnoz’ in Leuven. 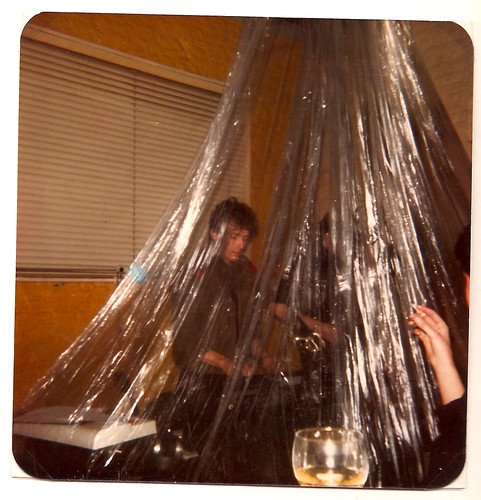 12. How do you feel about the renewed interest in your music and newer bands that look to the Neon Judgement for inspiration?

Well, that’s cool! The 90s were quieter for us because Grunge music was ruling. Suddenly people were tired of this kind of music and they wanted something else again. We’ve been remixed by lots of younger DJs and producers now. The Hacker, Dave Clarke Tiga, they all refer to TNJ as an inspiration for their own music. That’s nice because those people brought a new electro feel amongst the young kids! Because the DJs refer to us so often, we can decide that we’ve co-operated close to the future of music in general.

13. Do you have any current musical projects or future plans for the  Neon Jugdement?

We’ve just finished a documentary about TNJ entitled ‘Docuvision 2010a1984’. It’s 35-minute documentary that tries to capture the feelings we had in the 80s. You can see quite some live footage from back then. For this documentary we could count on the co-operation of Dave Clarke, The Hacker, Terence Fixmer, Luc Van Acker. It’s directed by Jeroen Buytaert who made the video clip for “Leash” taken from our “Smack”-album (2009). We are touring with this documentary to present it to our fans. After the screening of it, we play a short live set that will feature some very early TNJ tracks like “13.13,” “Schizofrenic Freddy,”  “Machine Life.” We are trying to make something very special out of this!