Just in time for Fall, Dark Entries is proud to unveil two new releases for October 2010:

Dark Entries is honored to present the highly limited second cassette by British duo Nagamatzu for the first time ever on vinyl. "Sacred Islands of the Mad" is a collection of eleven tracks recorded between December 1984 and March 1986 in London by Andrew Lagowski (SETI, Legion, Terror Against Terror) on synths, guitar, and drum machines and Stephen Jarvis (Pure Motorised Instinct, Terraform) on synths, bass and programming.

Nagamatzu began in 1982 after messing around with old tape machines and drum boxes, making numerous contributions to international compilations and erratically releasing their own cassettes. Their name comes from a character in JG Ballard's "Atrocity Exhibition" and their music reflects his influence and incorporates carefully chosen samples from the Challenger shuttle disaster, Gregorian chants and films including "Dawn of the Dead" and "The Omen." All the songs were recorded onto a Ferrograph reel to reel in a small room at their parent's house and some of the backing rhythms and sequencers were recorded first onto cassette and then the band played along live. Nagamatzu's instrumentals combine stuttering bass, guitar bursts and funeral keyboards draped over a dragging drum machine beat, calling to mind Clock DVA, Cabaret Voltaire and early New Order or Cocteau Twins. "Sacred Islands of the Mad" is a complex, textured tapestry of sound full of dark electronics, fresh harmonies and danceable rhythms.

All songs have been remastered especially for vinyl by George Horn at Fantasy Studios from the original cassette masters. Each LP is limited to 500 hand-numbered copies and includes a newsprint zine full of fliers, gig tickets, ads, and photos. 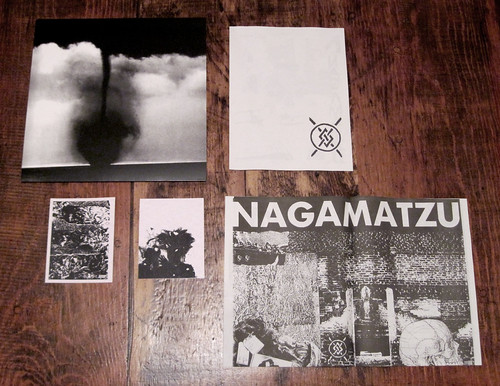 
DE- 008 Pesteg Dred - Years Of Struggle Against The Lies, The Stupidity And The Cowardice LP

Dark Entries has tapped into their Gothic roots to unearth a 29-year old lost album now available for the first time on vinyl. 'Years Of Struggle Against The Lies, The Stupidity And The Cowardice’ was written, recorded and produced by a trio of Danish 18-year olds during a weekend in December 1981. Unable to pay for the recording session, the master tapes were confiscated and the album remained unreleased until the summer of 1985 where it was issued as a bonus cassette with the Danish art magazine Atlas.

This is the first and only album from Pesteg Dred, a trio from Denmark made up of Martin Hall (Ballet Mécanique, Under For, Before), Per Hendrichsen (Dialogue, Uté-Va) and vocalist Inge Shannon, who later starred in Hall’s project SS-Say. The band combines dark rumbling basslines with austere guitar shrieks and the occasional cello/violin/autoharp to create the perfect tension of soft/loud synthesized post punk. But what steals the spotlight of Martin Hall's well-crafted production are the dynamic vocals of Inge Shannon who ranges from cold Teutonic monotone to shrill cacophony at times bringing to mind Nico, Xmal Deutschland, Bettina Koster of Malaria! or Simona Buja from Kirlian Camera. This landmark album could have fit perfectly on the 4AD or Factory Records roster alongside A Certain Ratio, Bauhaus or Joy Division.

All tracks have been remastered from the original master tapes by George Horn at Fantasy Studios in Berkeley, CA and include a printed interview with Martin Hall as well as a silk-screened image of the original reel to reel master tape. Limited to 500 hand-numbered copies so grab one while you can. 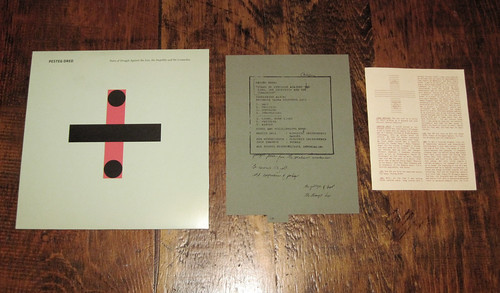 and next month brings a repressing of 2 OUT OF PRINT Dark Entries titles and some more surprises!:

The next few Dark Entries Records releases are in the works!

Thank you for your support always!