Happy New Year!
We are pleased to announce our next series of re-issues and the beginning of Dark Entries Editions 12″ series:
Lè Travo’s Erring and Errant LP, Big Ben Tribe’s “Tarzan Loves the Summer Nights” 12″ and Victrola’s “Maritime Tatami” 12″.
More info on each release is below.

Maritime Tatami
A Game of Despair

For our 55th release we are launching a special series called Dark Entries Editions, dedicated to 12″ singles made for the dance floor. The first release in this series is Victrola, the duo of Antonio “Eze” Cuscinà and Carlo Smeriglio from Italy. The band formed in Messina, but later relocated to Florence to join the rich musical scene there with Neon, Pankow, Alexander Robotnick and Diaframma. Beginning as a 4-piece combo (two guitarists, bassist, drummer) in 1979, they slimmed down to a synthesizer and guitar-based duo a few years later.

Their sole release was the “Maritime Tatami”/”A Game Of Despair” EP, from 1983. Using an array of now-classic Roland synthesizers (TR 606, TR 303 Bassline, Juno 6) plus a Korg Polysix and Fender Stratocaster, they crafted two darkwave ballads. “Maritime Tatami” engulfs the listener with trance-inducing synth lines and melancholic vocals over its epic 8 minutes. Oblique minor-key bass lines provide an anchor while snappy, brittle 606 rhythms propel the track along. The lyrics tell the story of Tatami, a boy from a fishing town who yearns for a new life in the big city. “A Game of Despair”, on the flipside, is a haunting crawl through the eyes of a woman left by her lover. An angular guitar riff repeats hypnotically, as fragile icy synth lines chime emptily above it.

Each song has been carefully remastered for vinyl by George Horn at Fantasy Studios in Berkeley. The vinyl comes housed in an exact replication of the original jacket, and includes an insert with lyrics and never-before-seen photos. Victrola’s only release is a truly singular and timeless masterpiece—it’s from a dimension of its own

Lè Travo is the brainchild of Patrick Bollen from Tienen, Belgium. As a teenager in the early 1980s Patrick would visit the infamous coldwave/gothic club “DeAtelier” in Leuven. There he would gather inspiration from Joy Division and other Factory releases, The Danse Society and Cocteau Twins. He gathered a some session musicians and a female backup vocalist. The set up was basic with live drums, TR-808 drum machine, Roland JX3P synthesizer, electric guitar and bass. Eventually Patrick bought a Greengate DE-3 sampler, using the brains of an Apple 2E with a keyboard bolted onto it. He crafted loops made from a deconstructed upright piano, hitting he strings directly with a drum stick.

“Erring and Errant” was originally released in 1985. This reissue contains 3 bonus songs that were released in 1984 on a split LP and produced by Luc Van Acker (Revolting Cocks, Ministry, Shriekback). Most of the songs are follow the French Coldwave style, similar to Weimar Gesang, Opera Multi Steel or early Clan of Xymox. The songs cover a range of sound and emotion. Vocals have a pumping feeling with a sense of urgency, while lyrics emulate teenage enthusiasm influenced by avant-garde movements such as futurism and constructivism, and by the literature of science fiction and existentialism.

All songs have been transferred from the original reel to reels and carefully remastered for vinyl by George Horn at Fantasy Studios in Berkeley. The vinyl comes housed in a glossy jacket with original artwork as well as a fold-out poster with lyrics and photos. Lè Travo is derived from French word “les travaux”, which means : the works, a fitting name for this compilation of lost music from the Belgian underground.

The next 12″ in Dark Entries Editions is a hard to find Italo Disco club hit. Big Ben Tribe are a trio formed in Trieste, Italy in 1983. The line-up is: Ricky Persi (bass), Stefano Previsti (computers and drum machine), Renato Posani (guitar & D.J).Their name is taken from the Disco Club ‘Big Ben’ in Trieste, the place where Renato Posani worked every night.

“Tarzan Loves The Summer Nights” was recorded in Milan in the Spring of 1983 and released on Gong Records in 1984. The band created their signature sound using a Mini Moog, Prophet 5, Korg Synthesizer, LinnDrum, Alembic Bass and Fender Stratocaster. Guest vocalist Clara Moroni softly sings about a romantic jungle dream adventure where she is living with the handsome and brave Tarzan. Strong LinnDrum percussion serves as a counterpoint to the infectious vocal melody and catchy synth hooks. The B-side features an instrumental version with extended breaks and dubbed out bass lines.

Both songs are remastered for vinyl by George Horn at Fantasy Studios in Berkeley. The vinyl comes housed in a glossy jacket with original artwork of a female model laying on the floor grabbing the leg of a mannequin. Each copy includes an insert with lyrics, photos and liner notes by Ricky Persi. “Tarzan Loves The Summer Nights” will transport you to a fantasy world full where you can find your own muscle man to love.

Clocking in at just under 90 minutes the compilation was too large to fit on CD format. However, Dark Entries will now be releasing a CD version that features all of the tracks minus the shortest track, “Pagan Rhythms”.

Perhaps one of the most revolutionary and influential people in the cannon of disco music, Cowley created his own brand of Hi-NRG dance music coined “The San Francisco Sound.” Born in Buffalo, NY on October 19, 1950, Patrick moved to San Francisco at the age of 21. He studied at the City College of San Francisco where he founded the Electronic Music Lab. During this time Patrick createe radio jingles and electronic pieces using the school’s equipment, first a Putney, then an E-MU System and finally a Serge synthesizer. He made experimental instrumental songs by blending various types of music and adapting them to the synthesizer.

By the mid-70’s, Patrick’s synthesizer skills landed him a job composing and producing songs for disco superstar Sylvester such as “You Make Me Feel (Mighty Real)”, “Dance Disco Heat” and “Stars.” This helped Patrick obtain more work as a remixer and producer. Of particular note was his 18-minute long remix of Donna Summer’s “I Feel Love” and production work with edgy New Wave band Indoor Life. By 1981 Patrick released a string of dance 12″ singles, like “Menergy” and “Megatron Man”, creating the soundtrack for a generation. Also that year, he founded Megatone Records and released his debut album. Around this time Patrick was hospitalized and diagnosed with a then-unknown illness: that would later be called AIDS. Prior to his passing on November 12, 1982, he recorded two more Hi-NRG hits, “Do You Wanna Funk” for Sylvester and “Right On Target” for Paul Parker.

In 1981 Patrick was contacted by John Coletti, the owner of famed gay porn company Fox Studio in Los Angeles. John had heard about Patrick’s music from the legendary Sylvester and proposed he write music for his films. Patrick jumped on this offer and sent reels of his college compositions from the 70s to John in LA. Coletti then used a variable speed oscillator to adjust the pitch and speed of Patrick’s songs in-sync with the film scene. “School Daze” is a collection of Cowley’s instrumental songs recorded between 1973 and 1981 found in the Fox Studio vaults. Influenced by Tomita, Wendy Carlos and Giorgio Moroder, Patrick forged an electronic sound from his collection of synthesizers, modified guitars and self-constructed equipment. The listener enters a world of dark forbidden vices, introspective and reflective of Patrick’s time spent in the bathhouses of San Francisco. The songs on “School Daze” range from sparse proto- techno to high octane funk to somber post-punk to musique concrete, revealing the depth of Cowley’s unique talent.

Featuring over 80 minutes of music, this compilation contains soundtrack music from two Fox Studio films, “Muscle Up” and “School Daze”, never before released on vinyl. The tapes were restored and transferred using the same speed and pitch settings, then remastered by George Horn at Fantasy Studios in Berkeley, CA. The artwork features classic gay porn imagery from the Fox Studio vaults plus an essay from Indoor Life vocalist, Jorge Soccarras and a poster of the original “School Daze” movie. For Patrick’s 63rd birthday, Dark Entries and Honey Soundsystem present a glimpse into the instrumental world of a young genius. These recordings shine a new light on the experimental side of a disco legend who was taken too soon. All proceeds from “School Daze” will be donated to Project Open Hand and the AIDS Housing Alliance. 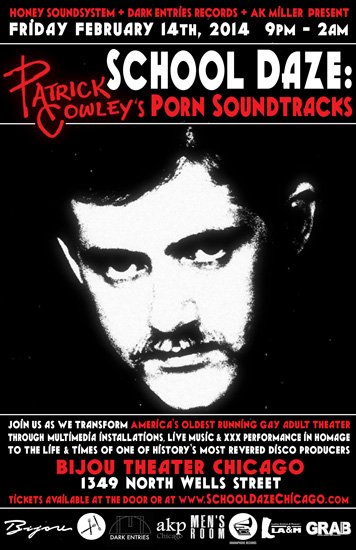 An intimate evening celebrating the life and times of one of history’s most revered disco music producers. Join us as we transform America’s oldest running gay theater and sex club through multimedia art installations, live music, and adult performance in homage to Patrick Cowley and the newly released School Daze record (now available on Dark Entries Records + HNYTRX Records).

Our next 3 re-issues are due at the end of February: 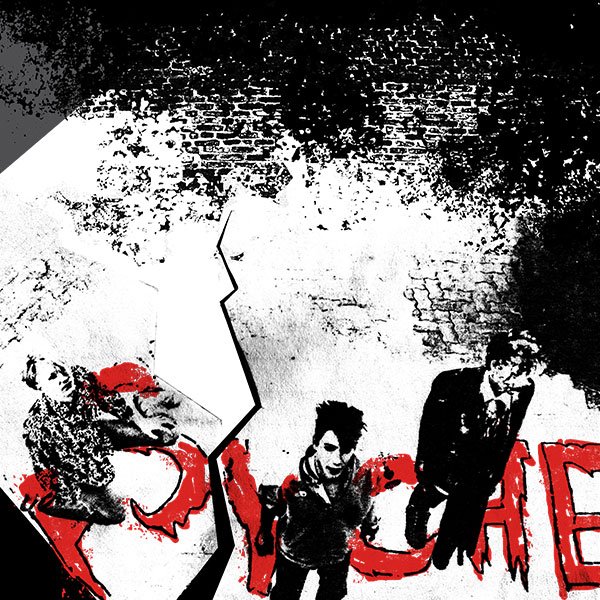 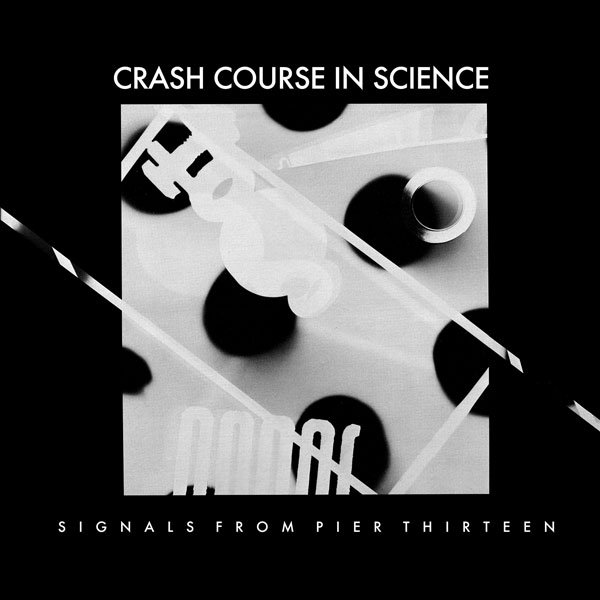 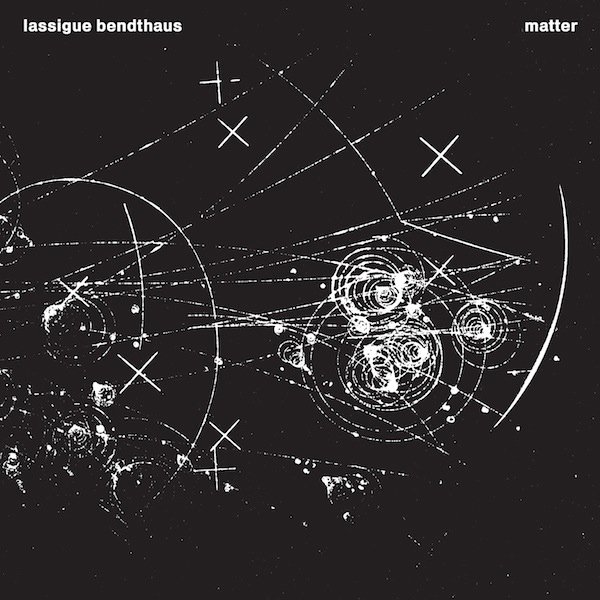